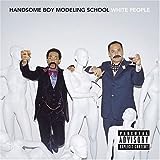 White People, the 2nd album from Handsome Boy Modeling School, follows where “So…How’s Your Girl?” left off. Bringing together all corners of the musical spectrum: hip-hop, rock, roots, alternative and even jazz, HBMS have put together a seamless cast of players that include: Mike Shinoda and Chester Bennington (Linkin Park), RZA, Jack Johnson, Alex Kapronos (Franz Ferdinand), Mars Volta, Pharell and more.After a five-year hiatus, superstar producers Prince Paul (De La Soul) and Dan the Automator (Gorillaz) join forces again, assembling an even more eclectic and arguably more rewarding sequel to 1999’s So… How’s Your Girl? Most producer-based albums suffer from guest overload, and certainly Handsome Boy has a challenge in juggling over 25 different cameos, ranging from Del Tha Funkee Homosapien to Barrington Levy to Pharrell Williams to Cat Power to John Oates to… you get the idea. Yet they thrown down with such creative aplomb that you’re just thankful to have a ticket for the ride. The vibe jumps from the soulful slide of “Breakdown” (feat. Jack Johnson) to the high-powered hip-hop of “If It Wasn’t for You” (feat. De La Soul and Starchild Excalibur) to the indescribably dense “Rock and Roll (Could Never Hip Hop Like This) Part 2,” which includes DJ Qbert, Lord Finesse, and Linkin Park’s Mike Shinoda among other guests. There’s so much to digest as Paul and Dan stock the album with a wide range of treats, and each listen reveals something new and delightful. –Oliver Wang