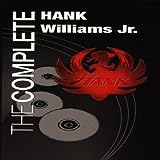 Hank Jr.’s career stands as the most frustrating of all modern honky-tonkers’, as much for the way the industry has managed his immense catalogue as for the way he has managed his undeniable gifts as a songwriter and singer. At three CDs, Curb’s overview is a far cry from “complete”: his best work, especially the tough, bluesy songs of Whiskey Bent and Hell Bound, is slighted in favor of a play-the-hits approach, even though Williams’s singles haven’t always been his best work. Likewise, the collection includes nary a cut from the sadly out-of-print Hank Williams Jr. & Friends, though the liner notes recognize that 1975 album as a landmark. Instead Curb has cobbled material readily available elsewhere on existing hits packages and complete albums. That said, Jr.’s country-fried rock–newcomers may be shocked at how hard he rocks–and his unreconstructed hillbilly ideology can be bracing on “Come On Over to the Country,” on the foreboding “A Country Boy Can Survive,” and on his best ’80s performance, a scorching duet with Johnny Cash on “That Old Wheel” (from Cash’s classic Water from the Wells of Home). But instead of focusing on similarly strong tunes, this box includes the tasteless beyond-the-crypt duets with Hank Sr., the silly, unblushing prejudice of “Young Country,” and the war-mongering diatribe “Don’t Give Us a Reason”–as if the listener needed reminders of just how bad Bocephus can be. What Hank Jr.’s legacy needs is a thorough, critical, and eclectic compilation of his finest performances. This set isn’t it. –Roy Kasten