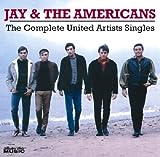 Having successfully brought to digital light the original mono single masters of Jan & Dean and Gary Lewis & the Playboys, we felt it was time to tackle the complete singles of another great 60s single band, Jay & the Americans! And when we say tackle, we mean we really put our shoulders into this one this set comes in at three CDs and 66 tracks strong! That s the A and B-side of every single in their original mono single mixes, virtually none of which have appeared on CD, all remastered from the original single master tapes that have laid dormant for decades, plus two promo-only tracks. Once again, Ed Osborne produced and annotated the set, and got quotes from Americans Sandy Deanne (Yaguda), Marty Sanders and Kenny Vance (Rosenberg). Single sleeves and photos round out the booklet. Includes the Phil Spector production Things Are Changing , which was written by Spector and Brian Wilson! Don’t miss this magically momentous Collectors Choice Music exclusive!