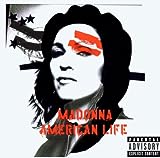 Madonna’s first album in three years. Includes the title track for the controversial video, ‘American Life’, as well as ‘Die Another Day’ from the MGM motion picture of the same name. 11 tracks plus enhanced material (Madonna extras). Produced by Madonna and Mirwais Ahmadzai. Maverick. 2003. Judging by her current pose, the Material Girl has mutated into the Military Girl. Indeed, this time out Madonna launches an assault on the miscalculations of her past while also airing her grievances with a troubled world. Madonna has always jumped on trends, but, for the first time, she leaps and falls as she revisits the minimalist synth-pop that she helped define in the ‘80s and raps like Debbie Harry about lattes and nannies. She also divulges career and personal missteps that her audience recognized all along, and had already forgiven–or embraced. With the exception of the entrancing Bond film theme “Die Another Day,” the music doesn’t measure up to 1999’s Ray of Light and ’00’s Music. And while Madonna has never been a stunning wordsmith, there is a distinction between the introspection on those albums and the self-absorption of American Life; the lyrics here often put one in mind of a cathartic letter one writes but never mails. –Beth Massa